When one considers the world’s airlines carry in excess of 2.6 billion passengers each year and transport over 48 million metric tons of freight, it’s easy to understand the important role our airlines play in the world economy and the growing safety and technological challenges we will face in the near future.

Given the immense volume of air traffic, it’s remarkable we have seen so few accidents in recent history.  Flight safety has truly reached levels of great, great accomplishment.  “Since 1997, the average number of airliner accidents has shown a steady and persistent decline, probably thanks to the continuing safety-driven efforts by international aviation organizations such as ICAO, IATA, Flight Safety Foundation and the aviation industry,” according to a CNN interview of Aviation Safety Network President, Harro Ranter.

2012 marked the longest period in modern world aviation history we’ve gone without a fatal airline accident.  Sixty-eight days.  And in the United States in 2013, four years had passed since the last fatal crash of a commercial jetliner, an accomplishment not realized since passenger jetliner service first began over 60 years ago.  Fatality risk for passengers in the U.S. is reported to be at 1 in 45 million.  It has been said, this equates to one being able to fly everyday for 123,000 years before suffering a fatal crash.

As a matter of fact, in terms of airliner accidents and fatalities, 2012 was the safest year for air travel since the International Civil Aviation Organization began gathering data in 1945, the year Laura was killed.  At that time in the mid 1940’s, approximately 12 million passengers flew just over 6 billion miles.

How is it that the aviation industry’s safety record has been so very successful?  Is it enhanced design and manufacturing of more dependable aircraft and engines? Is it the widespread application of progressive navigation and warning systems? Or maybe increased cooperation between governments and industry?  Advanced communication capabilities?  Is it better training?

It is due to the contributions from all these areas and more.  And yet, although there is much to be celebrated, there is still so much to do.

Flying is not without risk and as our skies become more populated, the future will almost certainly see an increase in that risk.  It’s expected the future will bring with it an ever-expanding global middle class, creating a boom in air travel.  And of course, more planes in the air translates into a greater likelihood for accidents.

Recently, Boeing predicted quantities of commercial aircraft will more than double and passenger flights will almost triple by the year 2030.  The backlog of aircraft orders for both Airbus and Boeing support this notion.  It’s been said, “If you wanted to order an airplane from Boeing right now, you wouldn’t get it for seven years.”

So we are living in an exciting chapter of challenges for the aviation industry.  A time for reflection and a time for great discovery.

Please help us recognize the work being done to keep our skies safe.  Your donation will help us honor those who are dedicating their lives to air safety and in the process, changing the world in which we live.

"Airline doors and windows are often inset a few millimeters from the fuselage so that they'll expand to be flush with the fuselage during flight."

"If you look closely at the top of jet airliners wings, you'll probably find a row of small metal tabs standing about one inch (2.5cm) tall, especially in front of the ailerons. These are vortex generators, which actually help the air follow the shape of the wing during flight by creating tiny whirlwinds over the wing. You can sometimes find vortex generators on the tail and in front of the rudder, too." 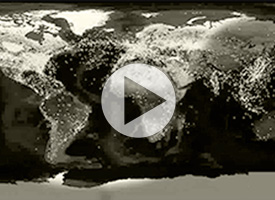